★★★★★ 4.5/5
A worthy finale to the spellbinding trilogy. This is the riskiest of the series but it massively pays off. 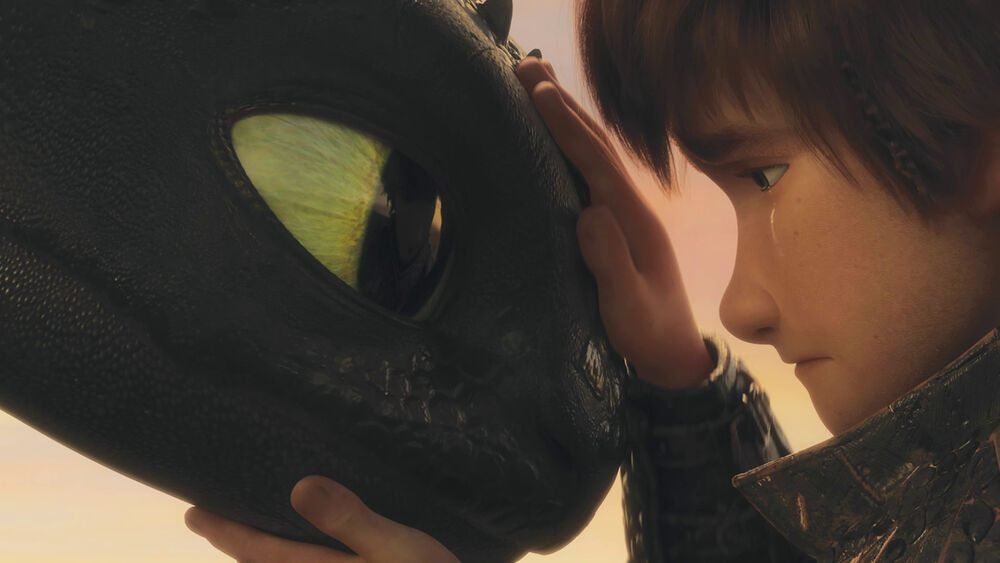 Fantasy is my favourite genre when done right. It has the potential to transport you to a completely new world, momentarily allowing you to forget everything around you. It pushes imagination to the limit, creating rich worlds and civilisations all while still telling a powerful yet relatable story. Often synonymous with the fantasy genre are striking visuals, triumphant scores and special effects galore. These prove to be very costly to make so it’s not often that we get to see many fully-fledged fantasy movies anymore. Fortunately, animated films exist, allowing stories to be told that wouldn’t otherwise make it to the screen.

The How to Train Your Dragon series does all that I just mentioned and more. It has everything that I want in a fantasy. On the surface, it may seem like just another kids animation but it has some of the best world-building that I’ve seen in any movie. Berk is a bustling little settlement, full of life, charm and…Vikings! I believe in all the characters and their friendships, even the ones between human and dragon. By choosing to live alongside the dragons and forgetting about the past and the actions of their ancestors, the people of Berk are thriving. It’s such an interesting concept that also manages to be relevant today. Just because it is the ‘done’ thing, doesn’t make it the right thing.

How to train your dragon 3 is the culmination of toothless and Hiccup’s journey and the end of a near-perfect trilogy. This time around the focus is on Hiccup and his leadership abilities. He’s matched up with the formidable dragon hunter Grimmel, almost a polar opposite to Hiccup. He’s pushed to his limits as a leader and as a friend in order to bring him down.

Let’s just take a moment to talk about the animation. It is truly breathtaking. Every individual dragon scale, hair on Hiccup’s head and particle of fire look amazing. We see large groups of dragons in one shot where each one looks completely original. Plenty of time was clearly spent on making the film look as good as possible. The goosebump-inducing Hidden World reveal was one of the most beautifully presented scenes that I’ve ever seen. I was so impressed that I watched a clip from the first movie just to see how far the animation has come, and the difference is mind-blowing.

Much like the animation, each character has also grown and developed over time. No longer a boy, Hiccup has learned from his past experiences and mistakes, becoming the leader of Berk. Having spent so much time with his character, every step he takes feels right. He still has the same insecurities and strengths but now understands what they are and how to utilise them. It’s a good message, you don’t need to be a chosen one or have special abilities to be a hero and a leader. Hiccup achieved it by staying true to his feelings and following his heart.

This is not just Hiccup’s story though, Toothless has just as much focus on him. It’s incredible how much personality and emotion is conveyed by an animated dragon. His scenes alone with the Light Fury are just as captivating as the rest of the movie, if not more so. I cared about what happened to him, also feeling the pain and joy that he goes through. This empathy is the heart of the film and the key ingredient to why it’s just so enjoyable to watch. I don’t think anyone will be able to get through the final scene without tearing up a little bit, I certainly couldn’t.

The thing that surprised me the most in this movie was the dedication towards each scene. Despite potentially alienating the audience, some sequences linger on for a long time, sometimes without any dialogue. These moments are truly magical, relying solely on the visuals and score. One example is Toothless and the Light Fury flying around with each other for the first time. It is stunningly presented, the two dragons dance around each other while flying through a picturesque stormy night sky. It has a serene quality to it and captures the essence of the moment perfectly.

While the good massively overshadows the bad in the film, it’s not perfect. The irritating characters from the previous entries return and are still more annoying than funny. The villain Grimmel is very underdeveloped and generic. His concept is fine but he needed more screen time to be fleshed out. Which takes me to the films biggest problem, the length. It feels way too short. An additional 10-20 minutes to flesh out the new characters would have made the film almost flawless. With the animation quality so high though, it doesn’t surprise me that the run time is shorter than the story deserved. That being said, 104 minutes is still impressive. I must have enjoyed it so much that the time just flew by.

For fans of the series, this is a must-watch. As much as I want another sequel, this was the perfect ending to an amazing trilogy.