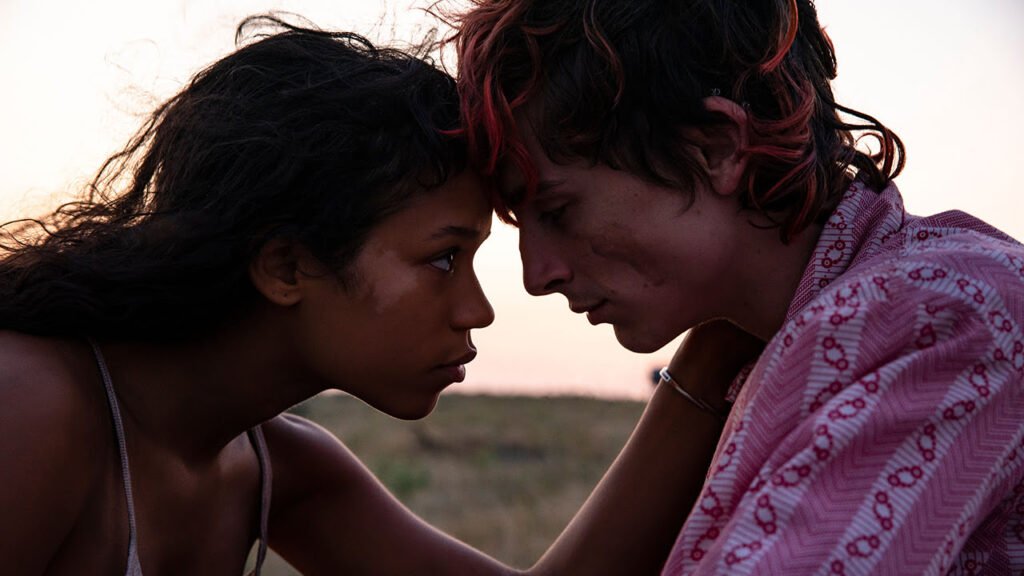 Bones and All is an intoxicating balancing act between the beautiful and the grotesque; Crushed skulls and crimson red bloodstains are interwoven with delicate hand touches and beautiful, far-stretching vistas. These two extremes may seem at odds with each other but the journey to finding yourself is never a straight path; It’s full of visceral twists and turns – both good and bad.

Sometimes we have no choice but to leave everything behind. To start afresh and carve out a new existence in the world. To be free from the restraints and pressures that encompass us from the moment we take our first steps. It may not be initially obvious but the ones closest to you could be the ones holding you back from discovering who you really are.

Maren is a girl searching for identity, setting out on a road trip across the US to seek out her long-lost mother. The destination is unknown, the end result is unclear, but the need for answers is definite. It’s on this journey that she crosses paths with Lee, a cannibal just like her. Lee is a drifter, wandering from place to place, morphing into the identity of the very people he consumes, never finding one he’s satisfied with. It’s only when these two meet that they finally begin to find a place in a world designed to reject.

It’s always important to note that no matter how different we feel, we’re not alone. There will always be others going through the same things and facing similar hardships. Bones and All is a film about finding solace among one another despite the odds being against you. Cannibalism might not be the most relatable of ways to portray this but the beauty is in the way it impacts you while watching; as a viewer, you must get through the disturbing and the disgusting to be rewarded with a scene of peace and serenity. It’s by experiencing this see-saw of emotions that makes the central relationship so powerful, so affecting. It also makes it true to life; No one finds it easy all the time. The struggles we face can often be just as potent as the times in which we feel free.

The clever use of changing tone is reciprocated throughout all aspects of the film. The score by Atticus Ross and Trent Reznor elegantly shifts from haunting to liberating. It’s the glue holding everything together, heightening each moment to leave you on the edge of your seat or sometimes feeling as if you’re about to float off it. Arseni Khachaturan’s cinematography also feels seamlessly in touch with the themes through its combination of long, wide shots with suffocating close-ups.

Strangely, the film’s biggest issue stems from its defining feature; The blend of horror and romance. While the two themes feel well integrated, they don’t fully work together as a whole to add depth to the characters as well as they could. The cannibalism aspect feels like it could be swapped out with anything and the story would still work. Compare this to the film’s obvious counterpart, Raw, in which cannibalism is used to portray self-discovery and sexual liberation, feeling essential to the text. The use of metaphor is woven into the fabric of the film’s themes and ideas, whereas with Bones and All, it’s all on the surface. Still, this issue is far from a movie destroyer. It just prevents the romance from ever feeling as fleshed out (excuse the pun) as it could, always feeling slightly underdeveloped in service of other aspects of the film.

I can’t be too harsh though, this was a wonderfully refreshing experience, which was bolstered by seeing it on the big screen. The fact of being unable to escape from the more gruesome sequences made it all the more affecting, especially to the unwitting friends I brought along with me, as they covered their eyes in disgust. They may now have trust issues over my choice in movies but the vast array of emotions it made us all feel was worth it. At least for me.