★★★★★ 5/5
A gorgeously shot debut from Kogonada that is full of passion and charm. 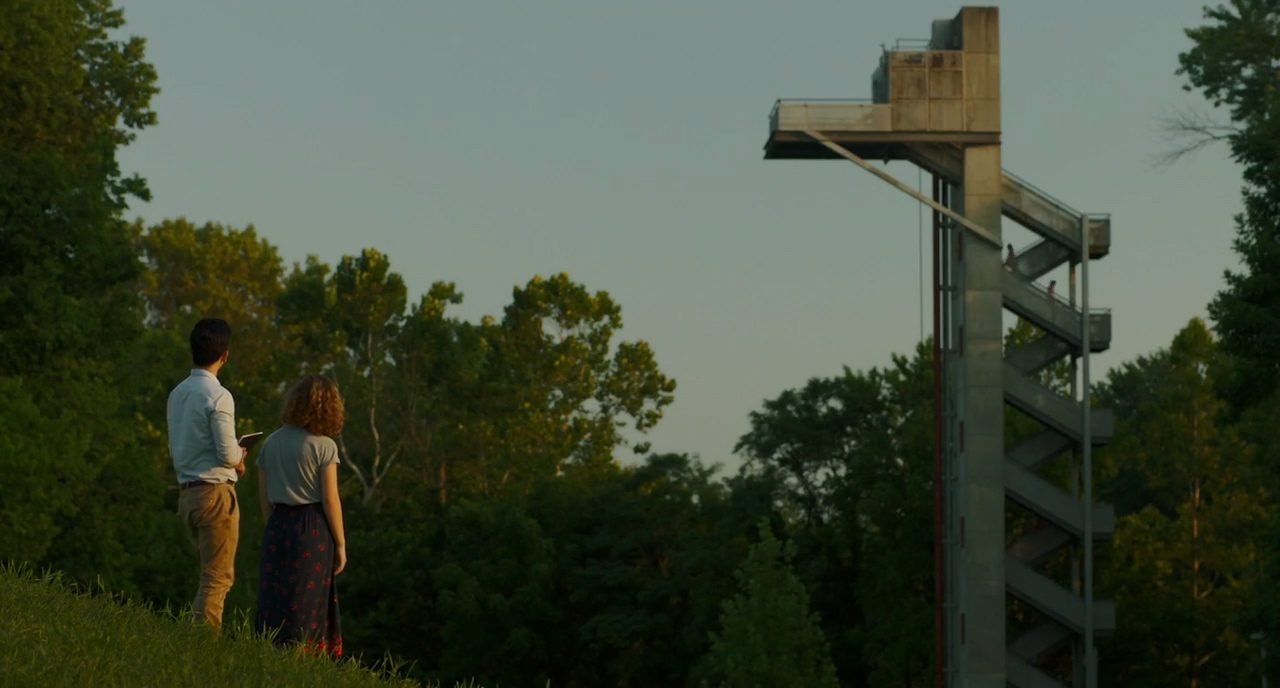 Sometimes a movie finds you at just the right time and place. I decided to watch Columbus on a whim, a spur of the moment decision on a dull Saturday night. What followed was one of the most tranquil and profound experiences that I’ve ever had while watching a film. It felt tailor-made for me at that current moment in time. For you to understand why this movie felt so special to me, I’ll first need to give you some background:

Columbus focusses on Casey, a young architecture enthusiast and Jin, a Korean-born man visiting his newly hospitalised father. Both of them have very different backgrounds but share the same feeling of being lost in their life. The film chronicles their interactions as they find solace in each other’s company. That is pretty much the whole film, two people ambling around Columbus sharing their thoughts. You’re probably now wondering ‘what makes it so special?’. I’ll first talk about my own personal experience with the film, before giving you a guided tour of all it has to offer!

For me, the relatability of Casey is what resonated with me the most. Like her, I am also currently in a gap year, a lull in my life that has been extended by Coronavirus. Just like Casey in the city of Columbus, I am stuck in my home city. There are no opportunities here for me but being around family and friends makes it tolerable. Following my passion is all I want to do but finding the opportunity and taking the big step forward is not as easy as it seems, especially during a pandemic. Do I wait for the perfect opening or rethink my ambitions entirely? Columbus encapsulates all of this and turns it into a peaceful work of art that is enough to motivate anyone to dive headfirst into the unknown.

Enough about me, let’s talk more about this wonderful film. Columbus is very much a tribute to passionate people. Casey lives and breathes architecture. She’ll jump at the chance to talk about it and latches on to Jin, who happens to be the son of a lecturer in architecture, after a chance encounter. Most importantly, Jin is someone who will listen. Finding someone who can listen to you talk about your passion is almost as important as partaking in it. We witness Casey’s delight as she tours him around the city, her voice speeds up and hands wave around more as she talks about the buildings she loves the most. Listening to someone talk about what they love is always a fascinating experience. People give off an infectious energy that can motivate and promote the productivity of your own.

It’s not just the characters who show passion, it’s the director himself. Before directing this movie, Kogonada made video’s celebrating the best of the best in filmmaking. This interest shines throughout the film. We see shots inspired by all of his most admired directors. There are corridors reminiscent of Ozu, Bergman-esque mirror reflections, Wes Anderson style symmetry and Kubrick One Point Perspective scenes. All of this culminates into one of the most gorgeously shot films that I have ever seen. So much care has been taken to make every scene the best it can be. It is a film made by a film lover.

The movie seems to mainly be shot in natural light, a technique that always seems to give across a dreamy quality. Most of the cameras used are static, meticulously positioned to accentuate the buildings that are on display. The use of symmetry lets you take in and appreciate the architecture, even if you are not interested in it. In what would be a mundane sequence in a library, the technique transforms it into a celebration of the building itself.

The majority of the film is backed by some sort of ambient noise. This includes chirping birds, running water, cars driving past and people talking. They are sounds that usually go unnoticed but Kogonada has a knack for emphasising even the most subtle of experiences. It puts you in a relaxed state of mind, freeing you up to take in every nuanced detail. When music is used, it has a big impact. Since it is used sparingly, it can make any scene be all the more powerful.

John Cho and Haley Lu Richardson are both excellent in their roles. They have a pure, genuine chemistry together, both playing off each other’s strengths. So many shots linger on both of them for a long period of time, yet they both manage to always feel natural and composed. One of the most compelling scenes involved Haley sitting down and thoughtfully staring into the distance.

Conversations feel real but meaningful. Nearly every line spoken is powerful or has some deeper meaning behind it. This may come off as artificial for some but I think it fits the film perfectly. There is a great exchange between Casey and a friend who is talking about how we’re losing interest in everyday life. The friend, played by Rory Culkin, tries to get his point across multiple times but can never fully explain his concept to Casey. This little interaction expertly contrasts with Casey’s effortless conversations with Jin. No matter how hard Casey’s friend tries, he’s not able to achieve the level of connection with her that she had with Jin from the very first encounter. You can’t force intimacy. The effectiveness of this scene is all testament to the quality of the writing. I was always just as interested in the opinions of a character as the characters themselves were.

Perhaps one of the most beautifully made films that I have ever seen, Columbus is a triumph in filmmaking. While I can’t guarantee that you’ll have an experience like mine, the film is of such high quality that at the very least, you will appreciate it.